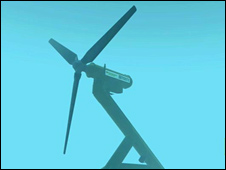 The coasts of Northern Ireland and Scotland are being targeted as having huge energy potential. However, none of the traditional methods will be used to harvest energy from this location. The project is focused around tidal energy. Locations off the Antrim Coast, Pentland Firth and the Sound of Islay may soon be home to underwater sea turbines.

ScottishPower has been working on an advanced tidal turbine known as the Lanstrom device. The sites would host up to 20 of these turbines at each site and the company is looking at getting planning permission next year.

These tidal turbines look and function similar to wind turbines. Tested in a Norwegian fjord, these structures are approximately 30 metres tall and work as deep as 100m below sea level. The 20-metre blades would turn to harness tide movements as energy. The blades would turn at least 10 metres below the surface to avoid shipping but trawlers would be banned from the areas for safety purposes.

ScottishPower claims there is no threat presented to marine life, but the Marine Conservation Society will be keeping a watchful eye on the project during the planning phases.